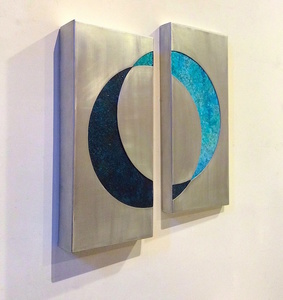 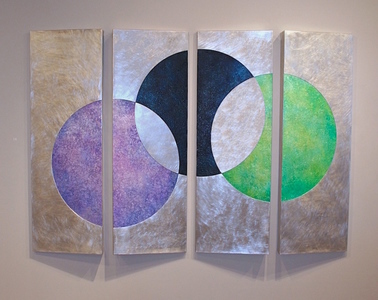 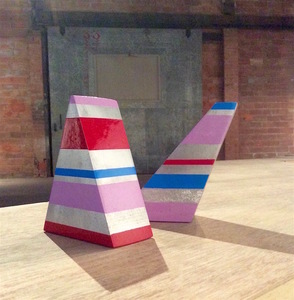 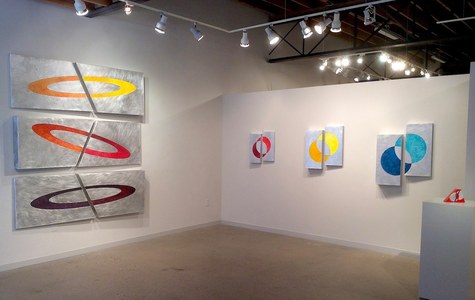 The KX2 collaboration combines the strengths of artists and sisters Dana Kleinman, born 1974 (Boston) and Ruth Avra Kleinman born 1979 (Washington DC). Ruth graduated from Wisconsin-Madison with a focus on metal, while Dana was one of the first art majors at Carnegie Mellon to receive Phi Beta Kappa honors. She later attained her MFA and taught art at the University of New Mexico. Accomplished artists in their own mediums, the collaboration began after personal struggles tightened the bond between
them in 2006. With nature and nurture fueling them, this groundbreaking combination of metal and painting involves large scale 3D aluminum construction combined with oil on canvas. The work was swiftly put into the public eye with an invitation to represent the United States at the 2008 Beijing Biennale at the National Museum of China, running in
conjunction with the Summer Olympics. They have also held solo exhibitions in Florida, New Mexico and New York. Since 2007, their work has been featured in numerous museums and galleries across the United States and abroad. The Kleinman sisters not only cross boundaries in mediums, but also in space as they currently live and work out of New Mexico (Dana) and Florida (Ruth).

2011 SCA Contemporary, “The Sublime, the Beautiful, and the Picturesque”, Albuquerque, NM