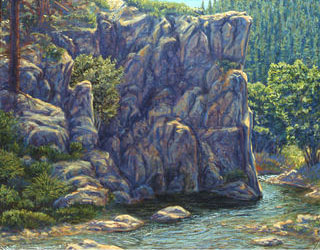 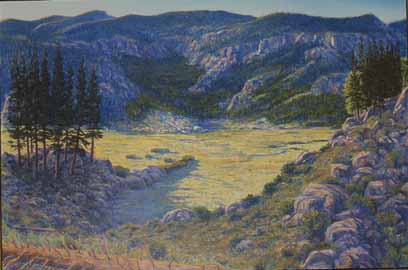 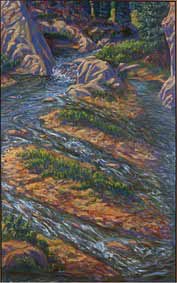 In 1976, Russell Hamilton moved to Albuquerque to study at the Tamarind Institute of Lithography where he completed training as a Tamarind Master Printer. After four years as supervising master printer at Western Graphics Workshop he opened Cuervo Creative Paper where he produced custom handmade papers and provided paper art services for artists of New Mexico and the southwest. Due to health complications and a busy art career he sold the paper mill to become a full time artist in 1986.

Since his first Santa Fe exhibition in 1980 he has exhibited consistently and is represented in public, corporate and private collections throughout the United States.

From colorful abstractions of the desert to the calculated geometrics of urban life and shimmering odes to mountain wilderness he has devoted his work to interpretations of the landscape through a variety of media.

Russell is known to the public for his artwork; as a printer, papermaker and co-director of the Exhibit 208 gallery, he has collaborated with dozens of artists and has left his mark on the arts in Albuquerque.

The Albuquerque Arts Business Association designated Russell Hamilton as a Local Treasure for 2009.

On writing about his artwork, Russell Hamilton says, “Art should ideally function as an expression of the individual’s very personal insights and vision.

As a basic premise, I feel that art should be self-explanatory and should provide for a meaningful experience for all who take time to see. To over explain is to destroy an essential mystery; this mystery is the very basis of art and is neither question nor answer.

Successful art does not wear thin with time, but continues to challenge the perceptive viewer who returns to look again and again. Perhaps it would be fair to say that I am seeking a sort of time-release factor in my work. I attempt to touch several levels of expression in creating a new piece. While the pure visual context of the work is based upon abstract interplay and charged color relationships, the real essence is with the primal forces which lend their power to the land itself. Mystery is the element used to invite the viewer to share in a dialogue with these forces and to gain new perceptions of their presence.”